Christina Cedillo has a sticky note on her computer, reminding her which buttons to press when she calls the California Employment Service with questions about disability benefits.

But at this point, she doesn’t need it. After calling hundreds of times, she can recite the entire phone tree from memory.

Cedillo, who works as a bartender, gave birth to a daughter in October 2021 and immediately applied for disability benefits, which covers the pregnancy. In mid-December, however, the payments ceased.

She couldn’t find anything on the department’s website that explained why, so she started calling. The worker she contacted said many payments had been delayed due to fraud, but should resume soon, Cedillo recalled.

When they didn’t, Cedillo estimates she called the service between 300 and 500 times in late 2021 and early 2022. She would sit and redial, often while breastfeeding, sometimes 40 times in a day.

She was not alone. Less than half of unique phone numbers calling the Employment Development Department’s Disability Insurance Branch call centers were answered on average between November 2021 and April 2022, according to department data. This is down from around 80% between May and October 2021.

Without pay, Cedillo put more charges on his credit card.

“I had budgeted for it and I knew I wasn’t going to get much from the state anyway,” Cedillo said. “And then not even having that – and I was depending on that – was really, really frustrating.”

In February, Cedillo received a letter from the department asking him to fill out a form and return documents to verify his identity. She sent the form and documents the next day, she said. The weeks passed. In April, she received another payment. She thinks she still owes $168 but, she said in an interview in June, “now I feel like I just gave up.”

The employment service overwhelmed with calls

The deluge of calls began in late 2021. In December, the department said it was taking action to prevent “suspected organized criminal elements from filing false claims for disability insurance.” California disability insurance replaces some wages for people unable to work due to illness, injury, or pregnancy, and medical providers certify the existence of a disability.

The agency had seen a massive increase in new medical provider accounts and suspected many were fraudulent, department spokesman Gareth Lacy said in an interview with CalMatters. Typically, the department received 70 new registrations from medical providers a week, but for four weeks, from late November to early December, it received about 30,000, Lacy wrote in an email.

To sift through the influx of claims, verify the identities of medical providers and claimants, and respond to a surge in calls, the roughly 1,000 disability branch employees worked 22,000 overtime hours per month from December 2021 to May. 2022. That’s ten times the normal monthly overtime average, according to Lacy. The disability branch also borrowed 133 employees from other branches of the department and brought back nine retired employees to help with the extra work, according to Lacy. To confirm the identities of the claimants and doctors, staff sent emails and letters, he said.

After:New election laws could create barriers for voters with disabilities

In January, the department said it had suspended approximately “27,000 suspicious medical provider registrations and 345,000 claims associated with those providers or other suspicious activity.”

Meanwhile, the number of calls to disability branch call centres, which also handle paid family leave, was increasing. In January 2022 alone, call centers received about 5.7 million calls, after receiving an average of about 443,000 per month from May through October 2021, according to data provided by the department to CalMatters. The vast majority of those appeals, Lacy said, were about disability benefits.

“Typically, when we have to suspend payments to separate fraud, we see an increase in calls to the call center in response to that decision,” Lacy said. Calls from people with questions about emails and letters sent by the employment service to verify people’s identities were also behind the increase.

“When the verification process adds extra layers of review and slows down the system that people normally feel to be fast enough and responsive enough, then people will call to find out, ‘Why is it taking longer than this to what am I used to?'” Lacy said.

The department increased the staffing of disability insurance call centers, from an average of 134 in November 2021, to 228 in February 2022, according to the department.

Some call center surges are predictable; Black Friday, for example, is likely to be very busy for retailers.

Call centers should also be able to handle unexpected surges, at least of some magnitude, “without breaking,” said Keith Dawson, vice president of Ventana Research, where he leads research on the experiment. customer.

But, when it comes to a more than twelvefold increase in call volume, as the employment service experienced, “there is no possible way they can be prepared for something of that magnitude,” Dawson said.

One strategy centers can use in the face of increased volume is to give callers more information, either online or in an automated message, so they can get their question answered without speaking to a human, said Dawson. But, he said, that approach is less effective if people call with questions specific to their specific situation. Another option is to quickly increase staff — which is difficult — or outsource some of the calls to a contractor, which is expensive and requires training, Dawson said.

But the recent surge isn’t the first time callers have struggled to reach a human. From May 2021 to October 2021, before the surge in calls, about 80% of unique phone numbers calling were eventually answered, according to department data, which means about 20% of callers never did. .

Difficulty reaching someone has always been an issue with disability insurance and paid family leave, said Katherine Wutchiett, an attorney at Legal Aid at Work, a nonprofit that helps low-income workers and runs a hotline for questions about the right of persons to take leave or to obtain accommodation. The organization has “always heard of people struggling to get that one-on-one, you know, ‘What’s the answer to that?’ I’m confused. I have no more money. What can I do? “Said Wutchiett.

Answering all incoming calls is the goal of any call center, Dawson said. “If you don’t answer all your calls, you’re doing something wrong,” he said.

As the Legislature and Governor squabble over how California spends its money next year, the Employment Department has made budget requests to bolster its fraud prevention and investigative efforts and modernize its functioning.

One request, for $23.6 million in the coming budget year, addresses fraud and includes an advertising campaign to raise awareness about identity theft prevention. The department also wants 13 new positions to work on fraud prevention, including in disability insurance and paid family leave programs, and funds to support the prosecution of fraud by local law enforcement. The Legislative Assembly denied this request, but included $136 million for the first year of a multi-year modernization project.

This project would include, among other things, reconfiguring the keyboard teleprompter process, adding multilingual functionality, redesigning forms to make them easier to fill out, and establishing a new customer experience team to conduct user research. and design and test new features.

The Legislative Assembly also approved $10.2 million for the coming year to improve cybersecurity, help mitigate fraud and improve monitoring of suspicious events, as well as $96.3 million for a slew of contracts. , including several aimed at preventing fraud.

Although the legislature passed a budget on Monday, the deal is not final; as negotiations continue with the governor’s office, changes could be made via additional bills.

In the meantime, Californians who have struggled to get their questions answered are frustrated.

Manar Hassan, who lives in the coastal town of Pacific Grove, applied for disability benefits shortly after giving birth in late February. She could see on the department’s website that her doctor had certified her claim in early March, but when payments still hadn’t started coming in two weeks later, she started calling.

One of two things would happen: she would receive a message that the maximum number of callers had been reached, asking her to call back later. Or, she said, “it would hang up.”

“I just thought, what do I do to get my hands on someone? I can’t sit on the phone all day, I have to take care of a child,” she said .

A friend who was also a new mother mentioned that the department sent letters to employers to confirm the last day of work, Hassan said, and she had a hunch that was the problem.

In mid-April, following advice she found on YouTube on how to communicate with a human on the service, she first connected with someone who couldn’t help her, and then, apparently out of luck, with someone who could send another letter to his company. Then the process happened relatively quickly; her employer responded to the letter and benefits began to flow in late April.

“I’m proud to live in California,” Hassan said. “I always tell my friends how progressive California is.

“But when you’re trying to get paid and you have to beg for your money, it’s just – it’s hard.” 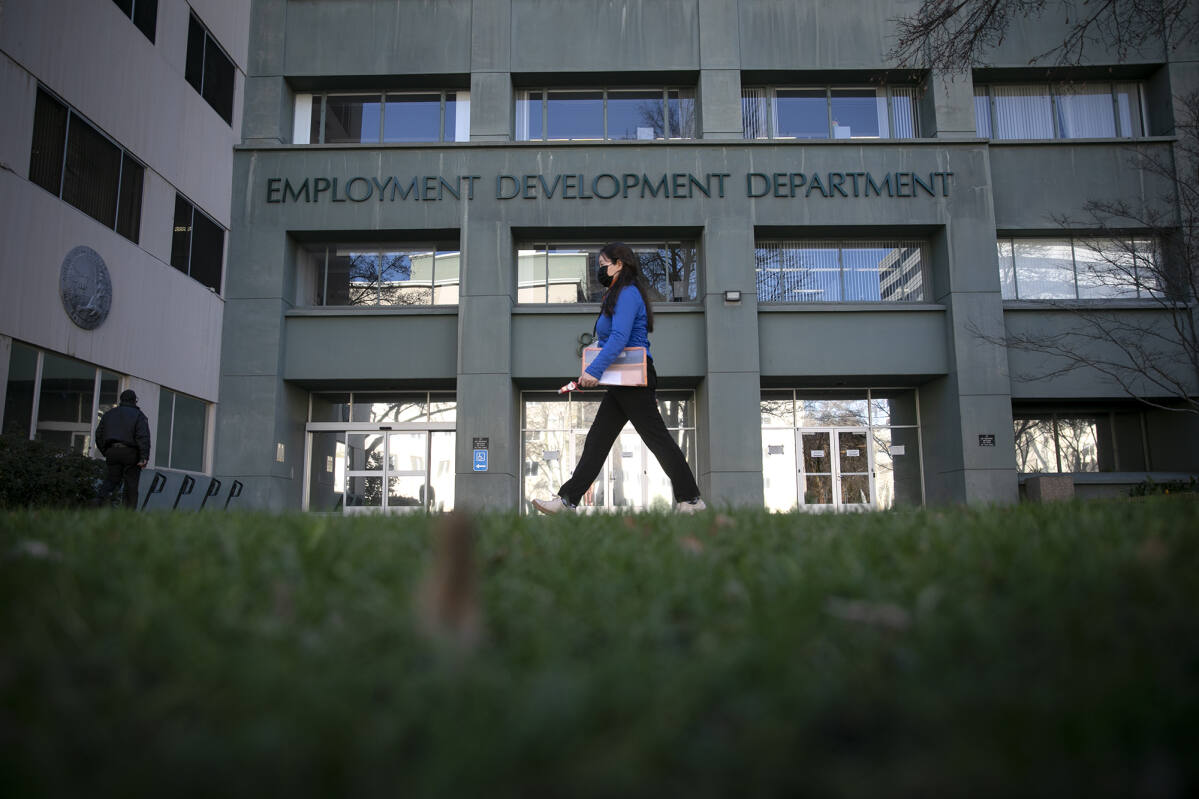 hard to answer Some call center surges are predictable; Black Friday, for example, is likely …