UNC TEACCH at 50: A global leader in autism care, training, education and research

Efficient, modern, and breathtaking in its scope, UNC TEACCH celebrates its 50th anniversary as a stellar display of commitment, excellence, and collaboration in helping people with autism and their families across the state and around the world.

“TEACCH is one of the few places in the state you can go to if you really want first-hand experience working with people with autism across the spectrum and across the lifespan. It combines clinical practice, field and research experience.–Brian Boyd, PhD, William C. Friday Professor Emeritus of Education at the University of North Carolina.

At its 50th anniversary celebration and conference this fall, you could see and feel the positive impact UNC TEACCH has had on the community. Hundreds of people from around the world have come together in person and virtually, each of whom is dedicated to caring for people with autism, training autism educators and caregivers, and research that helps millions of people.

Its influence now stretches far and wide, but initially the program was only available in North Carolina, thanks to funding from the State of North Carolina in 1972 to create a regional hub approach to providing clinical, training and research services for people with autism. Spectrum disorder (ASD) in North Carolina. The TEACCH autism program was developed in the mid-1960s by the late Dr. Eric Schopler, professor of psychiatry and psychology at the University of North Carolina at Chapel Hill. Schopler was one of the first to establish that autism was a treatable neurological disease. Previously, the parents were accused of causing what was then considered a psychological problem. In 1971, Schopler engaged parents as co-therapists in personalized treatments to help autistic children learn essential life skills.

“Today this approach is quite common in the field, but in the mid-1960s and early 1970s, no one was doing such things,” said Lee Marcus, PhD, who in his 48 years career at UNC, served as director of Chapel Hill. TEACH Center. He also recently received the Eric Schopler Lifetime Achievement Award at the UNC TEACCH Autism Program’s annual conference this fall.

TEACCH’s vision is to have a world where all people with ASD and their families have access to excellent evidence-based services in their home communities. Fast forward to 50 years after its inception, and the program is doing just that – expanding to seven outpatient clinics across North Carolina and serving all 100 counties in the state in 2021.

“Everything we do is about bringing evidence-based practices to families in their own communities, whether it’s research, training professionals, or direct clinical services,” said Professor Laura Klinger, PhD. Fellow in the Department of Psychiatry at UNC School of Medicine and Executive Director of UNC TEACCH.

In the early 1970s and 80s, a child could be diagnosed with autism as early as age five, although some people were diagnosed much later. Now, early invention can happen for 18-month-olds and 2-year-olds. And TEACCH doesn’t stop at childhood; the program offers early childhood services to people between the ages of 70 and 80, a big step in the field of autism.

“When autism was first conceptualized, it was called infantile autism, and children weren’t thought much of as they grew up,” Dr. Klinger said. “In the 80s, TEACCH was the leader in the field to start the conversation about adults with autism. We see a lot of people who were diagnosed in the late 70s and 80s now in their 50s and 60s. We are thinking about advance to needed programs and intervention supports for seniors with autism.

TEACCH’s clinical services are designed to promote positive behavior, communication, social skills, development and coping skills. Their programs range from: TEACCH for toddlers, regulating social skills and emotions at school age, transition to adulthood and adult mental health. These services are all tailored to meet the unique needs of each person with ASD and their family, regardless of age. TEACCH provides education and training such as workshops for parents, teachers and other professionals focusing on the characteristics of autism and intervention strategies. An employment program for individuals with autism is also offered in the Triad and Triangle, as well as a residential program located in Pittsboro.

As a member of UNC Autism Research Center, TEACCH researchers strive to determine what types of interventions work best for each individual across the lifespan. Projects include interventions for toddlers, children, adolescents and adults as well as outcome research for adults. The program partners with colleagues at UNC-Chapel Hill and across the country to improve knowledge about autism spectrum disorders and, ultimately, the quality of life for people with ASD and their families. Brian Boyd, PhD, William C. Friday Professor Emeritus of Education at the University of North Carolina who began his career at TEACCH after graduating from college is now a leading researcher, focused on how to better serve people with autism who are part of marginalized communities.

“People who have been diagnosed with autism are not far from living in poverty or living in racism or dealing with other things that marginalized and vulnerable groups face in this society,” said Dr. Boyd. “When you’re at the intersection of having a disability but also being a member of another marginalized group, it can really affect your results. Autism has no racial or ethnic boundaries and neither should our research studies.

The intersection of mental health and autism is also a research priority. Brenna Maddox, PhD, assistant professor in the UNC Department of Psychiatry and implementation scientist for the UNC TEACCH autism program, works on how to improve the mental health and quality of life of people with autism, with particular emphasis on suicide prevention.

From understanding how underrepresented groups are affected to addressing mental health and suicide prevention, TEACCH has become a reflection of the changes we see in how we accommodate people who have been diagnosed with autism. Research continues throughout the program to help individuals live long and meaningful lives. For those transitioning into adulthood, there is the T-STEP program, a transition to adulthood program that helps individuals become as independent as possible by helping them prepare for college and college. ‘use.

“Current research shows that students enrolled in the T-STEP program improve their job readiness skills,” Dr. Klinger said. “They are better prepared for work. They report less anxiety and they report more opportunities to make decisions for themselves.

In older people with autism, research has shown how cognitively capable people have reported symptoms of cognitive decline over the years. TEACCH is now striving to learn more about what it means to grow old with autism.

“In one study group, 30% reported symptoms of cognitive decline, with the average being 54,” Dr. Klinger said. “It’s a problem because 30% of the world’s population doesn’t show symptoms of dementia in their mid-50s, but we see it in our autistic population.”

Better access to care and adequate support are both key to improving the outlook for older people with autism. Effective research and answering these questions can really help push the field in the direction it needs to go, Klinger says, allowing for a better understanding of aging with autism.

The future of TEACCH 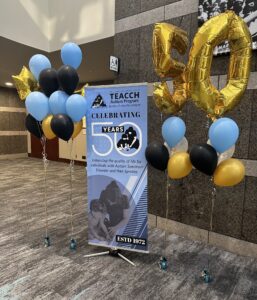 As a global leader in autism education, TEACCH offers a variety of training programs locally, nationally and internationally. These evidence-based practices are available to professionals to learn how to support students with autism in schools as well as patients in clinics. From educators to psychologists, the program last year trained 5,600 professionals from 46 countries, including professionals from 42 U.S. states.

“A lot of what we do in our professional development programs is training educators around the world on how to support students in their classrooms,” Dr. Klinger said. “It’s not a math, reading or science curriculum, rather it’s about providing support for learning differences for students with autism.”

According to the Centers for Disease Control, about 1 in 44 children are diagnosed with ASD, showing that there is a growing need to train community professionals in the field. TEACCH is growing rapidly and evolving over time to better serve people with ASD.

“I feel truly privileged to have the opportunity to lead an organization that has had such an impact for 50 years,” Dr. Klinger said.

“I think one of the fascinating things about TEACCH is how many well-known researchers in the field have worked at TEACCH at some point in their careers,” said Dr. Brian Boyd. “It’s really been fertile ground for the training of some of the impactful autism researchers.”

Aging research, effective virtual training and workshops, autistic voice amplification, and early intervention for children diagnosed with autism are TEACCH’s primary goals. It is a program that not only offers responsive practices, but appreciates each individual’s unique strengths while emphasizing the importance of lifelong continuous learning.

“It all started in 1972, when autism was unknown, to be today one of the most recognized conditions that a family can face,” said Dr. Lee Marcus. “Knowing that we are part of the changes made over the years to help families, students and professionals has been very rewarding.

Since its launch in early October, Hello leaders has provided decision makers in the aged …